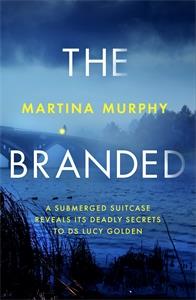 During an unprecedented heatwave the body of a young girl is found in a submerged suitcase in Loch Acorrymore on Achill Island. DS Lucy Golden is tasked with identifying her and returning her to her family. With the help of her team they discover that the girl was a runaway who had spent some time in a homeless shelter. She has been murdered and an investigation is launched.

Despite some promising leads Lucy's enquiries seem to be going nowhere until another the body with connections to the homeless shelter is discovered in what initially appears to be a suicide. Lucy knows that there is no such thing as coincidence but the race is on to find the link between the two victims before the trail goes cold.

As Lucy is drawn deeper into the case she realises that these murders may be a whole lot more sinister than first thought. Can Lucy keep a clear emotional head and get to the truth before more girls end up dead?

Martina Murphy lives with her family in Maynouth County Kildare. She has previously written general fiction as Martina Reilly (and years ago YA as Tina Reilly) published by Little Brown and Hachette Ireland. Her novel Something Borrowed was long listed for an Impac award.